Attenborough Is Sustainability Hero of 2020 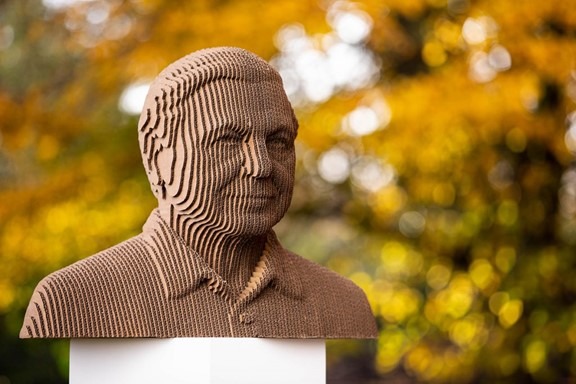 Sustainable packaging campaign group, Beyond the Box, has crowned Sir David Attenborough its inaugural Celebrity Sustainability Hero of the Year for 2020.

Over 8,000 people voted for various celebrities to win this award and have a corrugated bust made in the celebrity’s honour. Sir David Attenborough received the highest number of nominations by over 25%, beating an impressive list of British sustainability heavyweights and well-known environmentalists to the top spot.

Beyond the Box has created a new sculpture of Attenborough made from 97 layers of the UK’s most sustainable packaging solution, cardboard. The impressive bust, which stands at almost 2ft tall and took over 500 hours to construct, was unveiled in Battersea Park in December and commissioned as a tribute to Attenborough’s tireless efforts to promote sustainability amongst the British public.

Andy Barnetson from Beyond the Box comments: “At Beyond the Box, our aim is to keep Britons in the know about sustainable packaging solutions, like cardboard, and encourage everyone to make positive choices to help support the environment – whether that’s recycling pizza boxes or reusing shopping bags.

“This year, we wanted to take the opportunity to celebrate the famous faces doing the same, particularly those who are using their own platforms to keep sustainability in the spotlight and front of mind for people all over the UK – and what better way than to pay homage with an impressive sculpture painstakingly created out of this incredible, versatile material.”

The research conducted by cardboard campaign group, Beyond the Box, reveals Brits consider Attenborough an ‘icon’, calling him ‘the nation’s conscience’ and ‘the greatest influencer’, when asked which celebrity had the greatest impact on their sustainability efforts this year.

The research showed that almost 30% of Brits say their favourite famous faces encourage them to act more sustainably, while close to half said celebrities and influencers have a responsibility to use their platforms to encourage others to make eco-friendly choices.

The good news is, when celebrities and influencers do use their platform to talk about environment, their followers are particularly engaged. Three in 10 (30%) respondents said they would make an effort to help the environment if their favourite celebrities or influencers advised them to, compared to those who would buy a product or service (23%) or go to a restaurant (24%) after a celebrity endorsement.

Barnetson explains: “It’s clear that celebrities and influential figures have a big impact on the British public, from guiding the purchases they make, to informing their opinions on all manner of issues.

“With sustainability such a hot topic, it’s crucial those in the spotlight use their voices to encourage members of the public to continue to make small sustainable changes in the home or in their workplace.

“During an incredibly turbulent year, Britons have continued to make sustainability a top priority and we look forward to seeing the nation continue working together to create positive change throughout 2021.”

* Consumer research of 2004 adults conducted by Censuswide on behalf of Beyond the Box, November 2020.